Fairgrounds – You made an impact! Thank You!

Thank you everyone for your tremendous support with sending emails, letters, social media postings as well as attending the Board of Supervisors Meeting last Tuesday.  The attendance at the meeting was fantastic and youth in attendance made the largest impact!  Below are a few of the Board of Supervisors comments captured during the meeting:
Cindy Chavez ” . . .Thank you all for turning out today. Thank you to all of the extremely poised youth who spoke.”
Mike Wasserman “Young people were the best part of the meeting. They were so articulate, intelligent, and respectful. It taught me a lot.” And, he added, “Fair- Yes. . . I’m not in favor of moving the FAIR . . .”
Ken Yeager  “Keep the Fair at the Fairgrounds . . . let’s integrate it into the 150 acre plan.”
Dave Cortese “We have extraordinary, articulate young people, and leadership within this county . . we want proposers to help us think about space better and we have to have sustainability . . .”
Joe Simitian “Give those students extra credit for coming today. I am abstaining from voting on the Fairgrounds. It’s not that I have a lack of enthusiasm for the Fair, I need to see how to make it work for the long haul. I’ve seen the Fairgrounds struggling . . . economics are important.”
What was your impact to the Board of Supervisors’?
You can view the public speakers like the one below by selecting here! 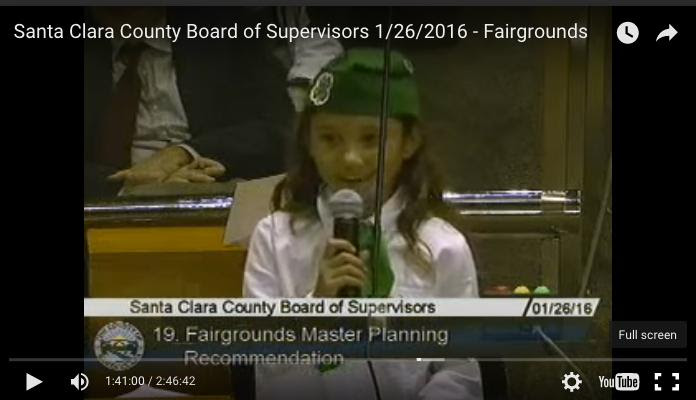 As a result of your comments what did they Board of Supervisors discuss?

What is next?
Full steam ahead . . . This year’s Fair slogan – Science, Technology, Agriculture/Arts and Math
At the end of this email is a response email from Cindy Chavez, Supervisor, District 2.  She sent this out to those that have emailed her regarding the Fair and Fairgrounds.
Thanks again for your help and we will continue to keep you informed and updated on opportunities to provide input and volunteer.
Regards,
David Peck & Board
The Clover Foundation of Santa Clara County
www.thecloverfoundation.org

—————————–—————————————————
A letter I received from Supervisor Cindy Chavez from District 2:
Thank you for emailing me with your thoughts on the future of the County Fairgrounds.
At Tuesday’s meeting of the Board of Supervisors, the Board considered this topic for over three hours.  We heard from over sixty members of the public and received hundreds of emails and calls.  Every Board Member especially appreciated hearing from the scores of passionate and articulate youth in attendance, who were primarily advocating for the continuation of FFA and 4H activities at the Fair.
At the end, the majority of the Board voted to continue our process to improve and enliven the Fairgrounds by seeking the formal presentation of ideas (called Requests for Qualifications).  We are also looking for ideas on how to improve the Fairgrounds facilities and ideas on how to pay for that.
The Board has voted to seek ideas that will develop the entire Fairgrounds into a grand public space that can house year-round events, recreation and open space for the community.  We will not sell the Fairgrounds – it will remain in public ownership.
We are hoping that this RFQ process will attract the best ideas that our team can mold into a final plan for the Board to consider late in 2016.  We are hoping that there will be proposals for many community amenities and attractions that can complement the Fair and each other by sharing parking, storage and flex space.
We are Master Planning the Fairgrounds transparently and publicly   This is taking some time, but I ask for patience because we are seeking to get it right and in plain sight.  Our public outreach in 2014-15 included three community meetings at the Fairgrounds and a fourth earlier this month that was specifically requested by the Board of Supervisors ourselves.  Our consultants also gathered public opinion at several community kiosks throughout the County and set up an on-line survey.  This process collected over 5,000 individual opinions from the public.  The Board of Supervisors has discussed the Fairground Master Planning during our open and public meetings on February 24, September 29 and December 15, 2015 and January 26, 2016.
The next step will occur when our County staff and consultants returns to the Board of Supervisors in March for approval of the actual RFQs to be issued.  At Tuesday’s Board meeting, the Board insisted on additional community meetings before that Board meeting.  I encourage you to continue to participate in this process.  You can see all of the materials provided to the Board at our previous meetings (and even watch the videos of the meetings themselves) at http://sccgov.iqm2.com/citizens/default.aspx?frame=no.  You can keep current on the Master Planning process by visiting our website at www.fairgroundsvision.org. There is an especially rich treasure trove of studies and reports on the Fairgrounds at https://www.sccgov.org/sites/faf/cp/mp/fg/Pages/Downloaded-Files.aspx.
Again, thank you for emailing me, and I appreciate your continued involvement.
Be well,
Cindy Chavez
Supervisor, District 2